Avicii, aka Tim Bergling is a house music producer that rose to superstardom within two years and took the electronic dance music world by storm with his signature melodious tunes that’s soothing and comfortable for long hours of listening. These soft, melodic tunes are usually paired with beats that’s enough to keep the adrenalin going but not causing any form of massive headaches.

This 22 year-old Swedish prodigy was first known for his hit instrumental single “bromance” which was later released under Ministry of Sound as “Seek Bromance” which features the vocals of Amanda Wilson. Later on, the legendary track “Levels” which features a sample of Etta James’ “Something’s got a hold on me” was also released and is now played and recognized worldwide by most Djs and fans. Many times, the track “Levels” is also being noted as “The sound of 2011″… and possibly even 2012.

Despite touring for only about two years, Avicii immediately became a headliner act alongside Armin Van Buuren on this debut trip to Singapore and Zoukout 2011. This talented and young Swedish is no doubt the soul behind what many defined as the “sound of now” (he is also the sole reason for my participation in ZoukOut 2011 as well as my frenzied act of standing in the front row for 9 hours awaiting for his set). 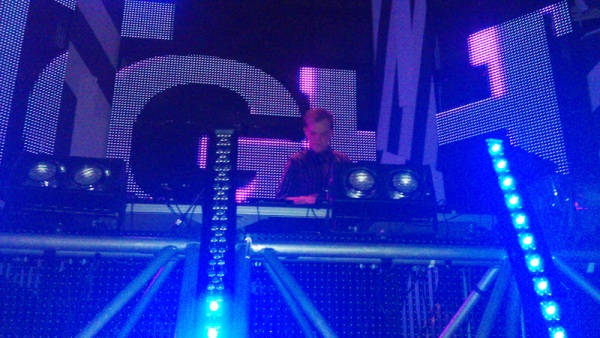 The man came out at exactly 3am after a welcoming introduction by Chuckie (who became the MC for the night). Chuckie hyped up the entire crowd who were in anticipation of Avicii‘s arrival but to be honest, Avicii needed no warming up at all. Once onstage, he started the show with a short intro that led to a remix version of “Fade Into Darkness” by Albin Myers which was incredible because Albin Myers’ remix has a distinctly different sound which was highly energetic (and is exactly the twist to make the crowd scream as opposed to the original version of “Fade Into Darkness” which was softer). Not that the original track needed any help to drive the crowd mad but that remix was a good twist into pumping more energy into the audience.

Throughout the night, Avicii dropped plenty of tracks of his own, which was exactly why I enjoyed his set so much because I feel that having the original tracks played by the original artistes instead of hearing the same “at the moment” or definitive, timeless tracks that’s played all over by different people is what distinguishes a good music producer-Dj from a mediocre one. As an added bonus, it’ll probably be even more awesome if the original artistes presents their own tracks in a more refreshing way that is previously different from the released versions. That’s bonus marks for elements of surprises!

Going back to the topic, tracks like Raise Your Head & David Guetta’s Titanium’s remix both by Alesso as well as Dada Life’s Kick out the epic mother f**ker among others were dropped. The choice of tracks that Avicii picked (which weren’t his) were generally of higher energy and these tracks were kind of like the contrast to Avicii‘s originals and that made the entire set even more marvelous because the set consisted of an amazing blend of high-energy tunes (to keep the audience pumping) and softer melodic tunes that were so good for the ears!

Throughout the set, Avicii showed enthusiasm by singing/humming to every single track (with or without vocals) although there were instances where he seemed pretty preoccupied. Truth to be told, in the case of Avicii, I am willing to be easy on critiquing his stage presence because he has defined a music style so distinct and addictive that his music on its own is able to send everybody into a state of euphoria.